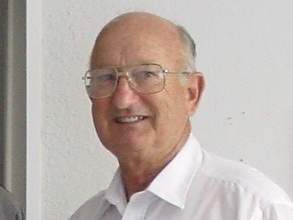 A graveside service will be held at the Gafford Chapel cemetery next to the Gafford Chapel United Methodist Church, 6839 Texas Highway 11 W, Sulphur Springs, TX 75482. On 6/11/2020 at 11:00am for the service. There will be a viewing available from 10:30am-11:00am at the graveside. A celebration of his life is being scheduled at his church Friendship Baptist Church for a later date.

Bill was born in the east Texas town of Quitman and died as the result of a vehicle accident near his east Texas farm in Elmo on 6/6/2020. In his lively 84 years he traveled the world but never forgot his Texas roots. Before high school Bill’s family lived all over Texas, but it was in Childress, that Bill found acclaim as a good student but an even better athlete. His quickness and natural athletic abilities made him a standout running back for the football team, an excellent shooter for the basketball team and his shear speed won many races for the track team. After graduating he went to work for F. W. Woolworth in Altus, Ok. This was the start of a 45year career in retail management. In 1957 Bill was transferred to Pampa, Tx where he met and after 3 months of dating married the love of his life, Sally Graves on Christmas Eve. Shortly after getting married Bill entered the Navy where he traveled to Japan, Korea, and Hawaii. After serving his time in the Navy, Bill went back to work for Woolworth in El Paso, TX. There he and Sally over five years adopted 3 babies, David, Darin, and Shawna. Woolworth subsequently transferred Bill and family to Albuquerque, NM, Tucson, AZ, and then back to Albuquerque. It was during his last stay in Albuquerque that Bill made his lifelong commitment…to the Lord Jesus Christ. His final move was to manage the Woolworth store in Big Town Mall in Mesquite. But it was not his last job. After 3o years Bill left Woolworth to manage a new startup clothing store, Ross in Garland. After 15 years with Ross, Bill decided to put his energy in serving the Lord and his family. He retired and entered the cattlemen business with the purchase of 30 acres of land and 3 little baby calves. He raised a variety cattle breeds and grew his herd to over 200 head. However, due to health issues (mostly just being 80!) he sold off all but 20 cows and just concentrated on the hay business. He always said he was happiest on his farm driving his tractor. That is how he died, loving the Lord, his Wife and family, and the freedom in the open air of East Texas. He is preceded in death by his parents, Curtis and Eva Browning, sister Cherry Richardson, brother Kenneth Browning, niece Dianne Butler and nephew Jim Zolnai.

In lieu of flowers, donations may be made in the name of Bill Browning to Friendship Baptist Church Mesquite, 820 Pioneer Rd, Mesquite, TX 75149,  http://www.friendshipmesquite.org or a charity of choice.

To order memorial trees or send flowers to the family in memory of Billy Browning, please visit our flower store.