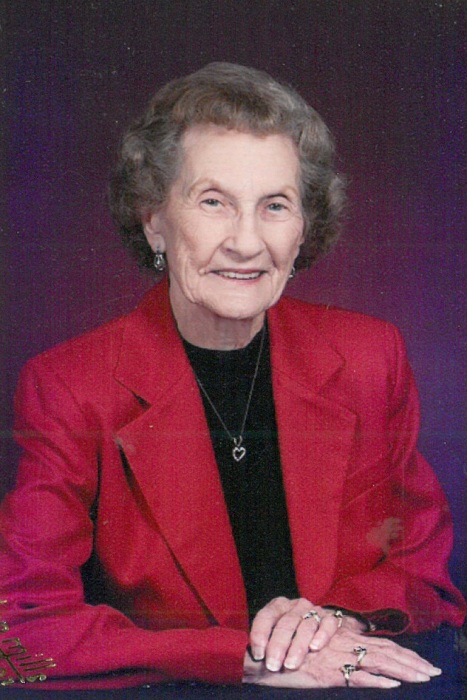 Christine Mark Street, loving mother and grandmother, went to be with the Lord at the age of 98.  Funeral service will be held at 2:00 P.M on Saturday, January 18, 2020 at Murray-Orwosky Funeral Chapel with Jason Dietze officiating.  Interment will follow at Restlawn Memorial Park with Chris Bell, Michael Bell, Mark Bell, David Jetton, Rick Mitchell and Mathew Mitchell serving as pallbearers and the Hopkins County Memorial Hospital Auxiliary Volunteers serving as Honorary Pallbearers.  Visitation will be held one hour prior to the service.

She was born in Sulphur Springs on September 13, 1921 o Chris Anthony and Mollie Berry Mark. After graduating from Sulphur Springs High School, she worked with Civil Service and the telephone company in Dallas.  In 1956, she was employed by North Texas Production Credit Association as Secretary-Treasurer for 31 years.  She was a member and officer of the Women’s Business and Professional Club.  After retirement, she enjoyed volunteer work for the Hopkins County Memorial Hospital Auxiliary, where she spent more than 25 years contributing her time and effort.  In 2011, with over 7,000 volunteer hours, Christine was honored with both the Humana Volunteer Award and the Presidential Volunteer Award.   Since 1954, she was an active member of the Sulphur Springs First Methodist Church, where she served as secretary and played piano for the Crusaders Class and Hamilton Bible Class.  Christine also spent a great deal of time supporting her beloved family, attending many school and sporting events even in her later years.

The family would like to thank the Wesley House and Wesley Oaks Staff and Choice Legacy Hospice.

To order memorial trees or send flowers to the family in memory of Christine Street, please visit our flower store.