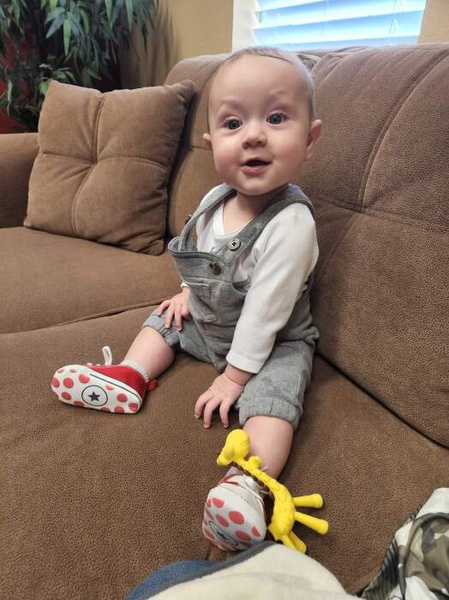 Celebration of life for Edward Gene Nickerson II, infant son of Jeannie Nickerson of Sulphur Springs will be held at 10:00 A.M on Friday, April 29, 2022 at Murray-Orwosky Funeral Chapel.  Visitation will be held one hour prior to the service.  Eddie passed away on Monday. April 26, 2022 at Cook Children's Medical Center, Fort Worth, Texas.

Eddie came into this world on September 16, 2021 in true Nickerson form, stubbornly. After 18 hours of labor Eddie finally decided it was time to make his grand entrance. With blonde hair and big blue eyes, Eddie stunned everyone in the room with his handsomeness. Eddie came home to the coziest little house on the most perfect piece of land, situated on the outskirts of Sulphur Springs, TX. Waiting for him there was his “Lola” (grandmother) and his two big sisters.  As a new born, Eddie was the perfect baby. He was never upset or angry unless his Momma was taking too long with his breakfast. Meal time could never get started, if his Lola was not present, he always knew exactly where she was. He had to keep an eye on her because she is so mischievous. He knew that if he had any chance of getting up to something naughty that day, he would need to know where she was. Never wanting to miss a single thing he was perfectly content to sit and watch. His first six weeks of life were spent getting milk drunk, napping on his favorite pillow on the couch, and watching Law & Order. Forever a snuggler and a lover of all things soft he enjoyed his Uncle Jeremy’s beard over a teddy bear any day. Eddie never met a stranger, he would laugh and play with whomever wanted to sit down with him...and anyone who met him, did just that. Most babies are scared of big animals. Eddie had no fear. He loved all animals but especially horses and ponies. With the help of his big sisters, he spent afternoons riding miniature ponies and watching thoroughbreds graze. A quick learner from the start Eddie was always well ahead of his milestones. Even if he did start out going backwards...he figured it out and there'd be no stopping him after that. He also had a love for dinosaurs, undoubtedly passed down to him from his cousin, Waverly. 90% of his clothes had a dino of some sort on it thanks to her and he was all too happy to wear them, he even fancied himself to be a dino at times. He often growled and “rawred” as he played with them. He spent most of his nights cozied up with Lexi, watching and cooing as they shared their love of anime and Korean soap operas. He would then make his way to Addyson’s lap where they would discuss the day’s events, Addy never minded that his side of the conversation consisted of absolute gibberish. Some nights they would end their talks with a growling match or, his favorite, a good book. Addy hates to read but her bubba demanded bed time’s stories. When his day of adventures was finally coming to an end he would crawl up into bed, underneath the covers, and into his most favorite place on this earth, his momma’s arms. Snuggled up tight, with his head tucked under his momma’s chin, he drifted off to sleep while getting his nightly foot massage.

Words will never express the amount of joy and love and happiness Eddie brought into this world, to his family, to his momma and sisters.  Until we meet again... Good Night, Precious Boy

To order memorial trees or send flowers to the family in memory of Eddie Nickerson, please visit our flower store.