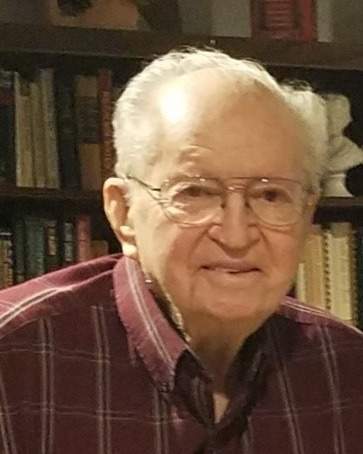 Funeral service for Edward Grant Bible, age 98 of Sulphur Springs, TX will be held at 2:00P.M. on Saturday, September 3, 2022 at League St Church of Christ with Buddy Wiggins and Ronald Owens officiating. Interment will follow at Restlawn Memorial Park with Steven Drachenberg, Mark Griffin, Gordon Bench, Kevin Wilkes, Tommy Panter, David Brock, Todd Kammerdiener and Ronald Owens serving as pallbearers. Visitation will be held one hour prior to the service.

Edward Grant Bible, a wonderful husband, father, grandpa, great grandpa, and friend, departed this life on August 30, 2022. He was born April 26, 1924, on the Bible family farm near Hollis, Oklahoma, to Paul Isaac Bible and Dena Ethel Bible. He married his high school sweetheart and the love of his life, Lucille Cary, on December 23, 1943. This December would have brought them to their 79th anniversary. Grant attended school at Gould and LaCasa Consolidated School, graduating from LaCasa in 1942. He then attended an Airplane Mechanics and Engine repair school in Lawton, OK before he was called to service during World War II. He joined the US Navy, received his training in Farragut, Idaho, and was assigned to Manchester, Washington, to work as a Yeoman Striker. After the war, Grant and Lucille returned to Hollis, Oklahoma, to take on the task of farming and working for Lone Star Gas Company. When it closed, he was transferred to Pauls Valley, Oklahoma. He soon applied for and went to work as a gas plant mechanic for Warren Petroleum which became part of Gulf Oil Company. In 1965 he was transferred to Sulphur Springs, Texas. Eight years later, Gulf Oil merged with Chevron Oil Company, and Grant was transferred to Longview, Texas, where he worked until he retired in May, 1983.

He was a member of the Lord’s church from his teenage years on, and during their 20 year residence in Longview, he and Lucille were members of Pine Tree Church of Christ where Grant served as a Deacon. They moved back to Sulphur Springs, in 1992, where they worshiped with the members of League Street Church of Christ. Grant was a handyman all of his life and enjoyed fixing things not only for the enjoyment of his family, but also for neighbors, friends, and the church.

Grant was preceded in death by his parents, his sister Paula Beth Plummer, his brother-in-law, Maurice Plummer, his daughter-in-law, Linda Waller Bible, and his son-in-law, Timothy Drachenberg.

The family asks that any memorial be made to a charity of your choice.

To order memorial trees or send flowers to the family in memory of Grant Bible, please visit our flower store.