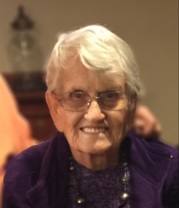 Private family burial and memorial service for Ima Grace Weir, age 92, of Copper Canyon, TX, will be held on at a later date at Pleasant Grove Cemetery in Cumby, TX. Mrs. Weir passed away on May 31, 2020 in Cumby, Tx.

Ima Grace Weir was born June 16, 1928 in Cumby, TX to Loyd and Ruby Chapin. She married Luther Davis who preceded her in death in 1975. She worked at the Child Care Development Center at First Baptist Church of Carrollton, TX for 30 years. Grace was a long time member of the Chinn Chapel United Methodist Church. Ima Grace was one of 6 children, and the only girl, that grew up during the Depression, but we never heard her mention being in lack of anything during that time. Her parents spoke of how proud they were of her when as a young teen she won a contest about an essay she had written on “Patriotism”. She helped by working in the family dairy business and attended school. She worked in the library in High School and helped her classmates. She graduated high school as Salutatorian of the class of 1945.

Grace lived a life of service to others. She was outgoing, selfless, and never met a stranger. She loved using the Flannelgraph storytelling system to teach children the Bible. She taught Sunday School, sang in the choir, and worked with the Girls Auxiliary. She taught Vacation Bible School for many years. She was a Brownie and Cub scout leader and served in every office of the PTA, including president. She collected and distributed food for those in need, always looking for a way to help others. She was a wonderful cook and loved preparing food for those she thought were in need at the time. She did these things and so much more. She was a model of unconditional Christian love. She was a beloved wife, mother, grandmother, and great grandmother, and she will be deeply missed by family, friends and all that knew her.

To order memorial trees or send flowers to the family in memory of Ima Weir, please visit our flower store.