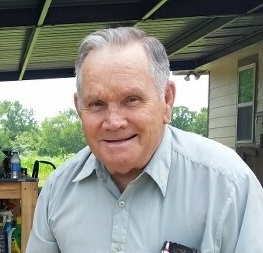 Funeral Service for James Dodd, age 85, will be held at 2:00p.m. Saturday, January 16, 2021 at Murray-Orwosky Funeral Chapel with Gary Thompson and Phillip Mathis officiating. Visitation will be held one hour prior to the service. A graveside service will be held at 2:00p.m. Sunday, January 17, 2021 at Carter Cemetery near Hamburg, Arkansas with Danny Kirkland officiating. Honorary pallbearers are his grandchildren, James Schwen, Jacob Schwen, Grace O’Neal, Joshua Schwen, and Faith Shcwen.

James Wyatt Dodd of Sulphur Springs, Texas, passed peacefully into the presence of his Lord and Savior, Jesus Christ, on January 13, 2021 at the age of 85. His physical struggles with pain are over and he is at rest.

James was born to William Royal (Roy) Dodd and Edith Pearl Harris on December 7, 1935 in Le Flore County, Oklahoma. He was a very caring and thoughtful middle child of 7 and middle son of 3.

He attended schools in Fanshawe and Leflore, Oklahoma where he enjoyed playing sports and learning about agriculture. James graduated from Le Flore High School and moved to Dallas, Texas. He took courses and received a certificate for accounting. He met Evelyn Lee Carter in Dallas and they married in 1956. Evelyn gave birth to 1 child, Lois (Dodd) Schwen. Evelyn passed away in June 1961 due to an automobile accident.

James married Betty Jean Seitz in 1969 in Durant, Oklahoma. They had no children.

During his years in Dallas, he worked for several companies including C & H Trucking and Continental Trailways.

In 1979 James and Pat moved to Hamburg, Arkansas. After working at several jobs, James and Pat began their own lawn and cleaning service. Through this service, they were able to meet and minister to many people in the Hamburg and Crossett area.

James accepted Jesus as his Savior in 1983. He was steadfast in his study of the Bible, having a quiet time and prayer most mornings. He was a quiet man in most instances, but he would talk about the Lord with anyone. The commitment he made to serve the Lord the rest of his life made the difference in his life and those around him.  James loved his Lord and loved being an American, and a patriot.

When he moved back to Texas in 2015, it was to be close to his daughter and family. He loved the country life and working with his hands, it brought him a sense of peace. His favorite hobbies were hunting, fishing, gardening, and canning which were all a necessity when he was growing up. Gardening was his solace, everywhere he lived he raised a garden. James liked having a pretty yard and beautiful flowers. He was very happy to have his dogs who were his constant companions. He was also good with small engines; many sought his help with their lawnmowers and weed eaters and James was always ready and happy to help.

James, also known as Daddy, Uncle Jimmy, Grandpa, friend and brother, loved his family and was very proud of them all. He felt blessed to have such caring people in his life including his neighbors and church family at Beckham Baptist Church.

“We are confident and prefer to be absent from the body and to be at home with the Lord.”
2 Corinthians 5:8

To order memorial trees or send flowers to the family in memory of James Dodd, please visit our flower store.