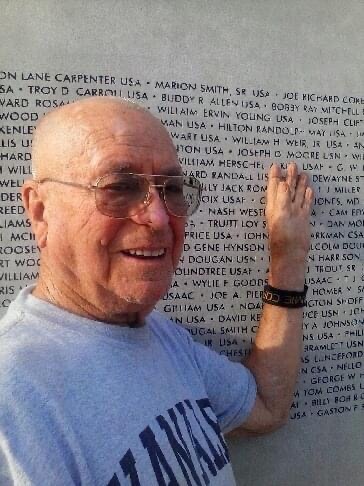 Memorial Graveside Celebration of Life service for Joseph Deryl Moore, age 97 of Sulphur Springs, TX will be held on Saturday August 13, 2022, 10:00 AM at the Reilly Springs Cemetery, Dr. Joel Tiemeyer officiating. Papa Joe passed from this Earthly life into the Loving Arms of Jesus Christ on August 5, 2022.

Joe was born on October 8, 1924 in Horton, TX to Richard Thurman and Minnie Lou (Earwood) Moore. Joe would grow up in Wilson, Tx later raised by his Aunt Clemmie after his mother’s passing.

Joe was a WWII combat veteran for the United States Navy, but only after his father convinced the recruiting officer to first let him get their cotton crop in. The recruiter would pass by on a regular basis and when the last row was done, Joe said let me grab my bag and he was off to the Navy. He studied Radio Communications and was a marksman before deployment. Though he would later acknowledge he never operated a radio during his deployment. Rather busy manning the guns as a port apron gunner in a PB4Y2 Navy patrol bomber. Joe and his crew would earn their Airman’s wings with the 3 combat stars in a matter of minutes, receiving the Presidential Unit Citation for Patrol Bombing Squadron One Hundred Eighteen. Citation: “For extraordinary heroism in action against enemy forces in East China, Korean and Japanese home waters during the Okinawa campaign.”

Joe married Charlene Lee on December 9, 1945 in Slaton, Tx. After settling in southern California, Joe worked as an officer for the US Border Patrol and later became an officer for US Immigration. Joe later became a car salesman as well as keeping up with his farming roots. He was a former elected official at Imperial Irrigation District in Imperial, CA. Joe was a member of the Lions Club, Men’s Prayer Breakfast at The Red Barn and a lifetime member of the NRA. Volkswagens were Joe’s love starting with his many trips to the Glamis and Imperial Sand Dunes driving Dune Buggies. Joe loved fishing and has probably already scoped out the best spots with fishing buddies that had preceded him and waiting for others to join.

Joe loved The Way Bible Church and later, due to limitations, attended Sunday School with friends closer to home. In his later days, watching church programs on TV, his favorite every Sunday morning was singing along with “Every day with Jesus is Sweeter than the day before!” sung on The Radio/TV Bible Class, SSFBC.

From a small-town depression era boy to The Kingdom of God. “Well Done, Good and Faithful Servant” … “Enter into The Joy of Your Lord” Amen!

A special thanks to Ronda Lee, Ashley Albert, Jolee Garner and Pathway Hospice for the loving care provided. Joe had a special relationship with Ed Robinson, Dick Williams, Jim Worster and members of The Men’s Prayer Breakfast.

In lieu of flowers, donations may be made to Wounded Warriors Project or Wreathes Across America.

To order memorial trees or send flowers to the family in memory of Joseph Moore, please visit our flower store.