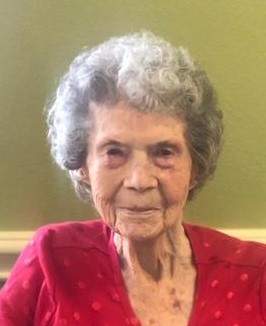 Mrs. Mable Claire Williamson passed away on Tuesday, March 24, 2020, at Carriage House Manor in Sulphur Springs, Texas.  Mable was born on June 16, 1931, in Dunlap, Iowa. She was the youngest of three children born to Gladys and Marion S. Smith. When in her teens, her father found employment that took the family to California where she lived until her marriage to Earnest Fred Williamson at Fort Ord, California, in September of 1949.

The couple lived much of their lives in Abilene, Texas, raising three children.  Mable was a homemaker and volunteer. Once her children were of school age, she used her extra time to volunteer through a sorority she joined.  She found a sense of value in working with the Muscular Dystrophy Association by helping to raise money for research. The year she was elected President of her sorority, she was invited to join the Jerry Lewis Telethon in New York to participate in the televised, annual fund raising event.  Another cause dear to her heart was the Abilene State School.  Here, the sorority threw birthday parties each month for the residents.  They also came in during holidays to add a bit more cheer.  Often, she brought one or all of her three children to help out by dressing them in costumes to hand out small gifts or treats that the sorority had purchased.

After living in Abilene for many years, the couple moved to several states with Fred's employment before returning to Texas later in life.  Mable is survived by her husband, Fred; daughter, Margie Musslewhite and husband Chapple of Arlington Texas; son, David Williamson and wife Marla of Lake Fork, Texas; eight grandchildren and 10 great grandchildren.

She is preceded in death by her parents, her sister and brother as well as her daughter, Marilyn Sue Abbott.

Her ever positive attitude and ability to find humor in most anything will be cherished.

A celebration a life service will be held at a later date.

To order memorial trees or send flowers to the family in memory of Mable Williamson, please visit our flower store.

Family to do services at later date