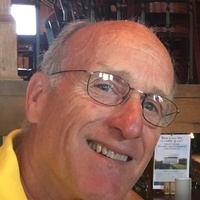 Mark was known as a good-looking guy who laughed easily, loved to work outdoors in the sun, could fix anything, loved to grill, ride motorcycles and especially loved cars. He was also an avid runner who especially enjoyed running the Bix 7-mile road race and the Quad-Cities Marathon.

Mark’s greatest joy was being “Papa” to his grandchildren, Benjamin and Ava, and a loving husband to Rox. They recently moved to Sulphur Springs to be close to Ben and Ava and be a part of their everyday lives. His most recent project was the construction of a three-hundred piece play set in the back yard for them, assembled in record time.

Mark sold Lexus luxury cars for 20 years and would often be seen wearing yet another jacket or hat with the Lexus logo on it, which he wore with pride. He would be seen almost daily walking their yorkies, Roxi and Lexi, at their favorite park. Everyone who knew Mark knew a true gentleman with a kind and gentle soul.

Mark was born on August 17, 1948, in St. Paul, MN to Vernon and Winifred. He served in the Army for four years, stationed in Germany. He devoted 26 years to the K-Mart Corporation, relocating across the midwest as a manager but was his happiest and at his best selling Lexus for Lujack Lexus of the Quad Cities. Since moving to Sulphur Springs, Mark was semi-retired and most recently provided support services for CHRISTUS Mother Frances Hospital in Sulphur Springs.

He married Roxanne Schnell in Bettendorf, IA on February 13, 2000, who provided him with an endless honey-do list. Mark was always giving, doing, fixing and making everything better and will be missed dearly.

He was preceded in death by his parents Vernon and Winifred and first wife, Diana.

To order memorial trees or send flowers to the family in memory of Mark Johnson, please visit our flower store.