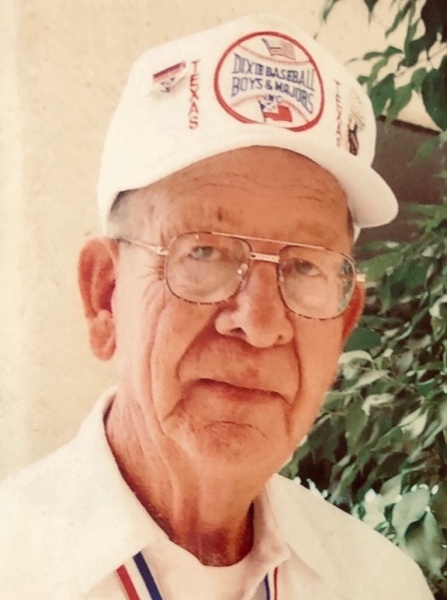 Mervis Dell “Dave” Davidson, age 84, passed away peacefully on August 2, 2019.  He was born on September 17, 1934 in Sulphur Bluff, Texas to John W. and Colela Powell Davidson.  After finishing high school in Jacksonville, Texas, he enlisted in the United States Air Force where he served for 17 years.  On November 11, 1968, he married Georgia Alice Thornton and they celebrated their 50th wedding anniversary in 2018. Together they have two sons.  Returning and settling in Sulphur Springs, Texas, Dave worked for the Northeast Texas Farmers Co-Op until his illness in 2018.

Known as “Big Dave” or “Dixie Dave” to many, he began his career with Dixie Baseball, Inc. in 1976 for the Hopkins County Boys Baseball Association (HCBBA) as a minor league coach.  Dave coached both of his boys (Shane & Justin) from 1976 to 1984.  Dave was the HCBBA commissioner in 1982 and was elected in the fall of 1986 to serve as the Dixie District Director for District 2 in Texas where he served in that capacity until 1990 when he was elected Texas State Director for the Dixie Majors division.  During his tenure as the State Director, the Majors program grew tremendously with record numbers of franchised leagues and producing World Series Champions and World Series Records by Texas teams and players.

In 1994, he was elected to become a National Board Member. He held this position until his retirement in 2002. In this valuable role, he promoted youth baseball and was responsible for much of the exposure garnered at the national level by players and organizations throughout the southwest. In addition to his role in the National Board, he served on several rule committees and served as the center point for Texas for submission of the National Dixie Baseball Scholarship award.

During his career, his prime purpose was to instill in youth the ideals of good sportsmanship, honesty, loyalty, courage and reverence to the end that participants of the program may be finer, stronger and happier than any other youth in other organizations resulting in those youth becoming responsible adults.

Dave was honored by the HCBBA in 1999 throwing out the first pitch to kick-off the ’99 season.  In 2016, he was honored by Hopkins County for his service to youth baseball with a proclamation naming October 11th as Dave Davidson Day in Hopkins County. And in 2017, he was inducted into the Dixie Baseball Hall of Fame.

He was preceded in death by his parents, brothers J.W. Davidson and Clyde Sears.

In lieu of flowers, the family requests to pay it forward by donating to Dixie Boys Baseball, Inc. Scholarship program in honor of Dave:  Office of the Commissioner, PO Box 8263, Dothan, Alabama 36304.

To order memorial trees or send flowers to the family in memory of Mervis "Dave" Davidson, please visit our flower store.