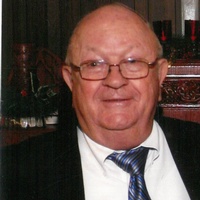 Rev. Charles James Rawlinson was born August 27, 1934 in Sulphur Bluff to William Tandy Rawlinson and Elzada (Reed) Rawlinson. In 1956, he married Shirley May Murray; she preceded him in death. He married Peggy Ann Whitten in 1975; she preceded him in death. He later married Judy Diane Cox Mitchell on January 1, 2012; she survives. Bro. Charles attended Sulphur Bluff School until the age of 16 when he had to drop out so he could go to work to support his family because his father had fallen ill. He later completed his education and attended Criswell Bible College where he earned his Bachelor’s degree in Ministry. He became a licensed minister on April 7, 1971 at Bowles Memorial Baptist Church and was ordained as minister at Park Missionary Baptist Church on March 5, 1975. He pastored four churches in his 50+ years of ministry. He pastored Park Springs Baptist Church in Dallas for 21 years, after which he never thought he’d preach again because of throat cancer surgery. However, God was not finished with him. He then ministered at Rockdale Baptist Church for four years, Independence Baptist Church for five years, Martin Springs Baptist Church for five years, and returned to Independence Baptist Church for an additional ten years until God called his servant home.

He was preceded in death by: his parents; grandson, John Eakins; two brothers; two sisters; and nephews, Tommy Starrett and Billy Emerson.

To order memorial trees or send flowers to the family in memory of Rev. Rawlinson, please visit our flower store.