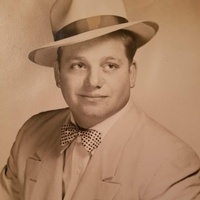 Funeral service for Tommy White, age 84, of Sulphur Springs,TX will be held at 11:00 A.M. on Thursday, March 29, 2018 at Greenpond Baptist Church with Richard Teer officiating. Interment will follow at Greenpond Cemetery with Jerry Dodd, Layne Glenn, Lauren Reeves, Tommy Robinson, Matt Bowen, and Robert Reeves serving as pallbearers and Tim White, Turk Morgan and Darrel Dodd serving as honorary pallbearers. Visitation will be held from 6 to 8 PM on Wednesday, March 28, 2018 at Murray-Orwosky Funeral Home. Mr. White passed away on Saturday, March 24, 2018 in Ft. Worth, TX

Tommy White was born on September 27, 1933 in the Greenpond Community, to Oscar and Effie Mae White. Tommy served in the US Army and was deployed during the Korean War. Tommy was a retired Farmer, Rancher and member of First Baptist Church, Sulphur Springs.

To order memorial trees or send flowers to the family in memory of Tommy White, please visit our flower store.