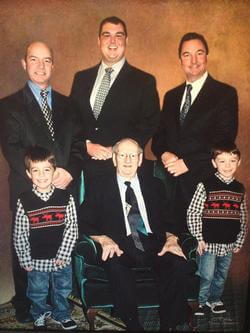 Murray-Orwosky Funeral Home, located near historic, downtown Sulphur Springs, has been owned and operated by the Orwosky family since 1963. We have been proudly serving Hopkins County and East Texas for over 55 years and through three generations of our family. Murray -Orwosky Funeral Home is known area wide for its compassionate commitment to all of the families it serves. We provide value (quality of merchandise, inclusive services, etc.), service (professional staff, reverence, aftercare), and the willingness to fulfill your expectations (promises kept, professionalism, attention to detail). We also own and operate our own crematory, one of very few in our area. This means your loved one never leaves our care. We’ve built a reputation of providing Sulphur Springs’ best funeral services by following our motto, “Serving as we would be served.” Our belief is that each of our clients is like a part of our family. We treat every person that walks in our doors like a friend and a neighbor, because we are your friends and neighbors. All of our staff live in Hopkins County and support and care about our community.

The Murray Funeral Home was established in Sulphur Springs, in 1889, by W.G. Murray. The firm was owned and managed by W. Ray Murray and William G. Murray until the early sixties, when Gene Orwosky became affiliated with the funeral home. In 1963, a new funeral home was built to better serve the community and was named the Murray-Orwosky Funeral Home. The new building opened its doors on November 1, 1963. Throughout the seventies, eighties, and nineties, many members of the Orwosky family have been honored to serve our community. While Gene ran the business, Rita, Gene's wife, assisted with office work at the Funeral Home. Their children were very much involved in the funeral home, as well. At some point, Bill, Laura, Jack, and Jeff all helped the funeral home to better serve the community. In 1997, Jeff, Gene's youngest son, purchased the firm and continues to run the funeral home with his wife, Sue, as a second generation Funeral Director. Jeff's son, Price became involved in the funeral home in 2010, which makes Murray-Orwosky and the Orwosky family serving the community for three generations. Now, Murray-Orwosky continues to "Serve as we would be served" for its 56th year.

We stand ready to assist you. If a death has occurred, please call us on the number below:

Visit www.prepaidfunerals.texas.gov for information relating to the purchase of pre-need funeral contracts including descriptions of the trust and insurance funding options available under state law.